Doji is a candlestick pattern that is very easy to identify. When it appears in the chart, you should observe the market carefully. When you combine it with other candlesticks and indicators, Doji will give you reliable entry points in IQ Option.

What is Doji candlestick? How does it work in IQ Option

Doji (means “Unchanged” in Japanese) is a special candlestick pattern which has similar or the same opening and closing prices.

When a Doji candlestick appears, both sellers and buyers do not take advantage of controlling the price. The appearance of Doji signifies the stagnation of the market.

There are 4 types of Doji candlestick that you often come across: Neutral Doji, Long-Legged Doji, Dragonfly Doji, Gravestone Doji.

Neutral Doji looks like a plus mark “+”. It shows that when the candlestick is formed. The price does not increase or decrease remarkably.

Dragonfly Doji looks like the letter “T”. It has a long lower shadow. Opening price and closing price are equal to the highest price during the time the candlestick is formed.

Gravestone Doji is contrary to Dragonfly Doji. Opening price and closing price are equal to the lowest price during the time the candlestick is formed.

4 different types of Doji candlestick pattern show 4 different trade signals. The ways we use them in combination with indicators are also different.

On the other hand, if the market price falls steeply and breaks out of the support zone and one red candlestick is formed, you can open a LOWER option after that.

You should open an option which is 3 times longer than the candle time period. For example, if you observe the 5-minute Japanese candlestick chart, you should change the expiration time to 15 minutes.

Unlike Neutral Doji, Long-legged Doji candlestick shows a “war” between buyers and sellers. The price fluctuates dramatically but closing price is the same as opening price. Long-legged Doji often appears at the bottom or the top of the market. This is a sign for you to open options in IQ Option.

For example, Long-legged Doji appears at the top of the trend. It is the signal of a high possibility that the market will reverse and go to a downward trend. Open a LOWER option right after that.

These are the other 2 versions of Hammer candlestick and Shooting Star candlestick. These candlestick patterns rarely appear in IQ Option trading.

The probability of price trend reversal is high when the 2 patterns appear. For example, when the price falls, Dragonfly Doji candlestick appears => the price reverses to an upward trend => Buy a HIGHER option.

On the contrary, the price rises and Gravestone Doji candlestick appears => the price reverses to a downward trend => buy a LOWER option. The longer its shadow is, the more reliable this candlestick has.

This is the introduction of basic Doji candlestick patterns. It’s also the signal for opening options in IQ Option. If you want to discuss this topic with us, please leave a comment. 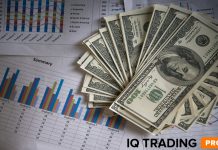 Three Candle Streak pattern for beginners with over 70% win rate 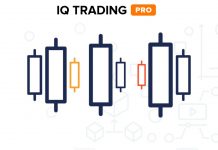 What is the Stick Sandwich candlestick pattern? How to trade effectively with it in IQ Option 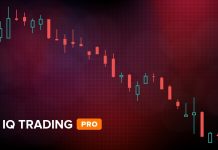 Fakey pattern – The most powerful trading signal in Price Action

General Risk Warning: The financial products offered by the company carry a high level of risk and can result in the loss of all your funds. You should never invest money that you cannot afford to lose.

Heiken Ashi candlestick pattern – How to use and trade it...